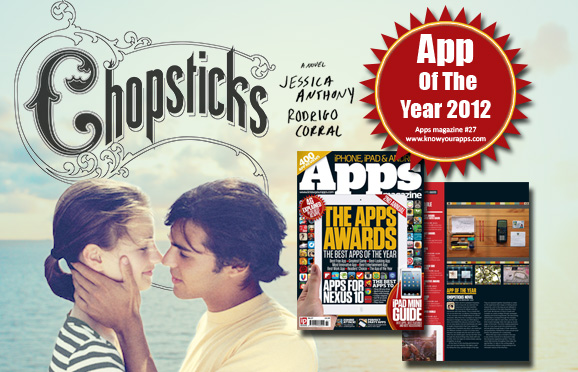 Chopsticks, an app we developed for Penguin Books US, has been named “App Of The Year 2012” by Apps Magazine.

Massive thanks to the writers and staff at Apps Magazine who work so hard to uncover hidden gems like Chopsticks from every corner of the various app stores.

‘There are clever little touches throughout that makes this app feel like it is right at the cutting edge of iOS interactivity without compromising on the minimalist nature of the interface,’ just some of the praise awarded to the Chopsticks app by Apps Magazine.

And from Jessica Anthony, co-author of Chopsticks,  ‘as the talented developers at Citrus Suite began sending us pages of the app, we watched in breathless awe as Glory and Frank’s story literally came to life. It was like magic’.

From our point of view it was a pleasure to work with Jessica Anthony and Rodrigo Corral to tell this version of their story.

Our respect to the digital team at Penguin Books USA, our friends at Razorbill and Penguin Young Readers Group – bold enough to make this project happen and assigning the development duties to the team based here in Liverpool, UK.

Developing the app was the sort of exciting challenge we love. We believe we created an app that is not only thought-provoking but also offers each reader an emotional experience with their time spent in the world of Glory the piano prodigy.

The Chopsticks app is an interactive version of the ground breaking book by Jessica Anthony and Rodrigo Corral – a book which found many fans through its visual approach to storytelling. The aim of the app, released simultaneously with the print edition, was to further enhance the qualities of the story, offering the user a different, unique experience through the content contained within.  Apps Magazine describe it, ‘memorable and utterly compelling for so many reasons; it’s a daring presentation of interactive fiction that jumps between so many different types of book and story. Then to combine it with a smart and gorgeous interface only helps to suck in users effortlessly.’

According to Apps Magazine, ‘Chopsticks changed the way we thought about interactive books and impacted us more than anything else this year’.

It is an honour to be involved in with an app that has made such a strong impression.

If apps are to be a part of the future of books, we’re happy to be involved in projects as ambitious and rewarding as this one.

Mobile application development and web design – our service offering from Liverpool based studio.