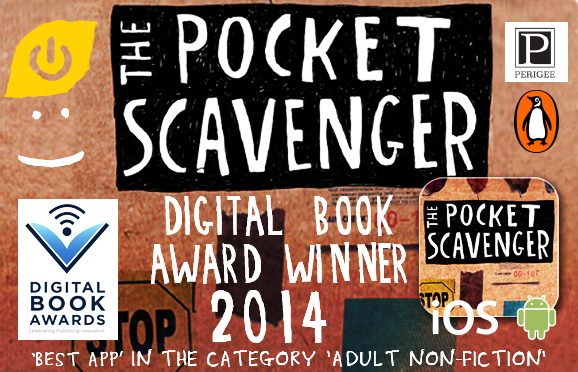 The Pocket Scavenger app has won the Digital Book Award 2014 for ‘Best App‘ in the category ‘Adult Non-Fiction’ much to our delight.

We are proud to have again worked with best selling author Keri Smith, Perigee Books and the amazing digital team at Penguin Books USA.  From New York City we have to single out fabulous Katherine & Meg for their great input and support during development.

Citrus Suite have never entered an app for an award but we’re grateful our perceptive publishers have. The latest award for ‘Best App‘ at The Digital Book Awards 2014 (category App – Adult Non-Fiction) will sit alongside recognition for ‘App of the Year 2012’ from Apps Magazine, honours for ‘Best Gamification’ for an mHealth app commissioned by a major pharmaceutical firm, and development duties on an app that won in ‘The Drum Marketing Awards 2013‘.

About The Pocket Scavenger
From the depths of our imaginary world, to you.

Following the success of Wreck This App and This Is Not An App, The Pocket Scavenger (available for iOS and Android devices -please see  iTunes Store or Google Play) is the ultimate way to explore your environment. The app, developed in 2013 at the Citrus Suite studio in Liverpool, was released simultaneously with the book of the same name.

Within the app, published by Penguin Books US, users are instructed, to document a spectrum of quirky items.

Users can take pictures or record audio of all the things they scavenge on their journey – creating a logbook of weird and wonderful items.

The items are added to the user’s map where they can also see what others have been scavenging.

Pocket Scavenger is Citrus Suite’s forth project with Penguin USA (including Apps Magazine’s 2012 ‘App of the Year’ Chopsticks) and third project with Keri Smith (including Wreck This App and This is Not an App). Across iOS and Android a total of seven apps.

Pocket Scavenger is available to download at iTunes Store and Google Play (Android).

*Keri Smith is an author/illustrator turned guerilla artist. She has several bestselling books, including the phenomenal Wreck This Journal, This is Not a Book, How To Be An Explorer of the World, Mess and Finish this Book. Read more at her website HERE

You can read more Citrus Suite news below.