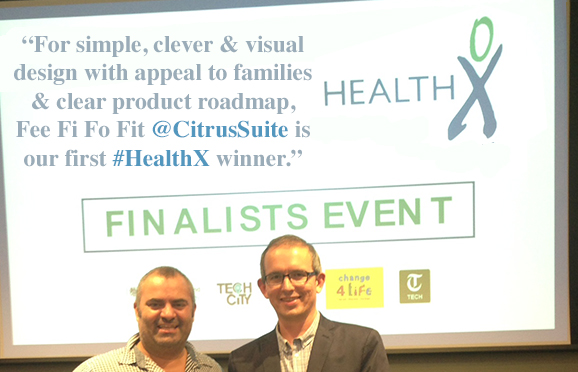 PHE launched Health X to identify and support the latest applications and utilities  to make a difference to people’s lifestyles. The mission to get people moving and improving their eating habits – a collaboration between the best emerging software applications aligned Public Health England’s scale and resource.

Response to the initiative was strong, with a total of 138 ideas being entered from developers across Europe. The winners will be rewarded with promotional support through PHE’s Change4Life campaign, presence on the NHS Choices website and help with product development.

We heard about the event by chance from our friend Jason from Open Labs. Open Labs provides a brokerage service for businesses to access the specialist expertise and facilities available within Liverpool John Moores University.

We were up for the challenge. Being a creative digital agency we already had some outline ideas around the themes that interested Health X. Chris and I decided to get away from the office and have a really good brainstorm.

The idea actually came about quickly. We had some cool little characters that were looking for a home. I’d been using Moves to track my walks and just loved the simplicity of the app. Chris had been going out with his family and tracking their activity of a weekend; he and Claire, his wife, were always looking to keep their children active.

So “Fee Fi Fo Fit” was born. We wanted an app that would engage all the family especially the kids and give collectable rewards. The app would be time based so would work with or without GPS or 3G/4G  and allows parents or kids to track their walks and set goals. The rewards being the little cool characters I’d drawn and that Chris has named the Outsidelians. And the most important point – the app would be very accessible and easy to use. Click and go almost.

Chris went home and told the kids what we were doing. James, his 7 year old, jumped right on it. He thought it sounded cool and started to come up with loads of ideas for what you could do with the characters, like keeping them in a trophy cabinet, and the more you walked the fitter and  stronger the characters would get. You could also collect power-ups for the characters as you walked and eventually you could play against other characters. All these ideas were good and so we included them. So thanks James our honorary Citrus suite designer.

We submitted the idea and got a call from Alex Johnson. The panel loved Fee Fi Fo Fit and we were shortlisted for the prize from 138 companies, down to 10 and could we come down to London for the final and pitch to the panel, which would be made up of representatives from Public Health England, The Daily Telegraph, Entrepreneur First, Health Box, Delta Partners and Tech City.

Unfortunately when the call came I was in Barcelona and Chris was in Turkey, so when we arrived back in the UK we were delighted to be greeted with that bit of good news, already buzzing we’d been shortlisted.

The day of the pitch came. We been preparing for a 5 minute pitch followed by 5 minutes Q&A. We had decided that Chris was going to go in. Health X had already received the slideshow and everything was set. As Chris walked through the door to pitch he was told that the pitch time had been cut down from 5 minutes to 2 minutes with questions to follow.

Chris not being one to be thrown, improvised and cut the pitch down to 2 minutes and got the basic concept across, the story behind the app and James’ role as well. He came out shaking his head, not really sure how he performed.

After the last company had pitched, while the panel deliberated, we all had a drink in the bar and no one really knew which way it would go. During this networking Professor Kevin Fenton, Director of Health and Wellbeing at Public Health England came out and chatted to all the contestants. I imagine he’s a really good poker player because he gave nothing away, no matter how much I asked!

The call then came to go to the auditorium and we filed nervously downstairs, still unsure who had won; hopeful that we’d get the chance to launch our product with the backing of PHE and all that they could bring to the app – a marketing database (3.2 million users), the On Demand Portal and the NHS Choice website (10 million visitors a week).

The moment came and Duncan Selbie, Chief Executive, Public Health England made the announcement. There would be three winners and in no particular order the first winner was “Fee Fi Fo Fit”.

We couldn’t believe it – completely delighted. We were ecstatic and selfies populated Twitter and Facebook for the rest of the evening. We also got an award to take away. Normally our publishers keep these so it was a nice first. The other winners were FoodSwitch UK and VisualDNA, who – along with the other finalists – had some brilliant ideas.

So we’re about to start developing Fee Fi Fo Fit. But what does it mean to us as a company? In everything we do, we like to think that we can impact people’s lives, from the app for young people living with ADHD to the Innovate Dementia project, we feel we’re adding great social value with our work.

For us it was never about the prize money. It’s about the opportunity to work with Public Health England and the expertise that they offer, the endorsement for Fee Fi Fo Fit as it goes out into the public domain is second to none.

About Health X: The Telegraph

Citrus Suite is a creative design studio producing award winning mobile apps for globally known clients. We are making an impact, having seen THREE apps reach number one in various App Store charts in 2011 and 2012 (including US and UK).

We’re seriously good. But don’t just take our word for it, people seem to like the apps we’ve produced: ‘App of the Year 2012’ from Apps Magazine; ‘Best Gamification’ award win for an mHealth app commissioned by a major pharmaceutical firm; ‘The Drum Marketing Awards 2013‘ development duties on winning app; ‘Best App‘ at Digital Book Awards 2014 (in the category ‘Adult Non-Fiction’).

Are chatbots the future of healthcare?